RSS
← The man on the Ypres omnibus
Nurses and heroism →

The Canham murder: love and betrayal

“About two hours before I was to go over the top for the first time I heard that my wife had deserted the little boy.” With this dramatic sentence, Henry Stephen Canham told a court how he had heard of his wife’s betrayal. On 1 January 1918, he shot her in the chest and killed her.

Henry Stephen Canham married Gladys Amy Baxter in London in April 1915. Both were in their late teens and Gladys must have been heavily pregnant because their son Charles was born less than two weeks later. (Confusingly all their official records list their names the other way around: Stephen Henry Canham and Amy Gladys Baxter)

Details of the Henry Canham’s marriage and child, 1915

Henry ‘attested’ in the Derby Scheme in late 1915 and was called up for military service in April 1916. By the end of 1916, Henry was on the Western Front serving with the Machine Gun Corps, leaving mother and child behind at their house on Wrotham Road, Camden.

While he was in France, he received a letter from a Mrs Davies:

Your wife is not going on as she ought to. She steps out at night and has sold up most of your things. She has left the baby by itself and the poor little thing cries all day. I have seen her out with Australians.

As Canham said, he had plenty to worry about at the front, without his wife’s infidelity and neglect of their son to add to his burden. Further letters told of her infidelities with Canadian and Australian soldiers, and apparently she sent him ‘insulting letters’.

In December 1916 he successfully applied to have the army separation allowance to support his family sent to Canham’s mother instead of his unfaithful wife. 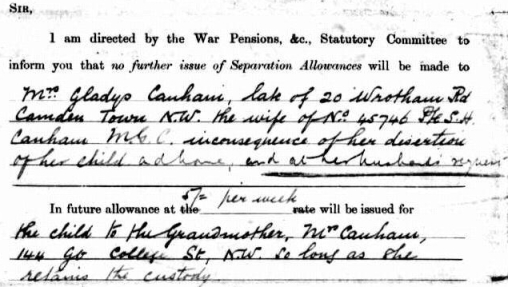 Application to transfer support money to Canham’s grandmother after Gladys abandoned their child.

When he returned home on leave at Christmas 1917, he went to his parents’ house on Great College Street (Gladys having apparently sold their house on nearby Wrotham Road) and tried to track down his wife.  On New Years Day 1918, he saw her at her parents’ house in Greyfriars.

As he told the Magistrate:

I went, and somehow she got round me. I said I would forgive her if she would give the life up and look after the child. She said she would. We then came home to my mother’s place and went to bed. During the night she said that she had got a complaint which she thought she had received from an officer. This upset me. I thought of the letters I had received. I got out of the bed, got my revolver, and shot her.

Infidelity among soldiers’ wives was a common allegation among the ‘hell in a handcart’ sections of the media and society. There were (unfounded) fears of a boom in illegitimate births in 1915. Later in the war, postal censors reported that stories about soldiers’ wives supposed immoral behaviour was a major concern for soldiers – way beyond the scale of the actual problem. Sadly for Henry Stephen Canham and his little boy, the stories about Gladys were true.  Although apparently willing to take his wife back, the news that she had contracted some sort of venereal disease (a.k.a. ‘a complaint’) was just too much for him to bear. (We only have his side of the story of that night of course, but he seems to have been judged an honest man)

The soldier was found guilty of manslaughter, Mr Justice Atkins saying that “a more pathetic and more tragic story of short domestic life” had never unfolded in a criminal court. Given his good record as a soldier and his willingness to forgive his wife, and his wife’s terrible behaviour, the judge believed that “no body of … reasoned men would believe that punishment in a sense of imprisonment is fitting to this case.” Instead Canham was “bound over in the sum of £5” (the equivalent of being on bail).

Canham was thus free to return to his unit. His service record shows no trace of his crime; he simply changed from married to widowed status.  He returned to the front and fought again. In May 1918 he was taken prisoner by the Germans – in the middle of their last-ditch attempt to win the war on the Western Front. He returned to Britain in December and was demobilised in 1919.

Official report of Canham’s service and behaviour – with no mention of him killing his wife.

Posted by Stuart on 4 March 2012 in Events, Ordinary Londoners

← The man on the Ypres omnibus
Nurses and heroism →

2 responses to “The Canham murder: love and betrayal”