Today the latest lists of honours to military personnel have been published; of the 131 medals, 130 were to living recipients. In the Great War, a quarter of the Victoria Crosses (Britain’s highest award for bravery) that were awarded were posthumous. Since these recognised the gallantry of men who died in or shortly after the deeds they were rewarded for, the medals were presented to their families. Among these stand-in recipients were Gertrude Margaret Jarratt and her daughter Joyce. This is a short attempt to tell their story.

Gertrude Elkins was born in 1893 in Buckinghamshire but had moved to London by 1911. In early summer in 1915 she married George Jarratt. He joined (or perhaps had already joined) the army, signing up for the 12 Battaltion Royal West Kents in the City of London. In 1916 their daughter Joyce was born.

George transferred to the Royal Fusiliers and became a Corporal (or Lance Sergeant) in their 8th Battalion. In early May 1917, they were fighting in the Battle of Arras. The citation for his Victoria Cross, published in the London Gazette and reprinted in the mainstream press, reports that:

He had, together with some wounded men, been taken prisoner and placed under guard in a dug-out. The same evening the enemy were driven back by our troops, the leading infantrymen of which commenced to bomb the dug-outs. A grenade fell in the dugout, and without hesitation Cpl. Jarratt placed both feet on the grenade, the subsequent explosion blowing off both his legs. The wounded were later safely removed to our lines, but Cpl. Jarratt died before he could be removed. By this supreme act of self-sacrifice the lives of these wounded were saved.

George Jarratt was killed in action. The violence as well as the bravery of his death were public knowledge. We cannot know how Gertrude felt when she heard of his death, the manner of it (both in that he was killed by the British grenade and in the horrendous injuries he sustained), or the posthumous recognition of his bravery. It must have been a time of great emotion – sadness and pride – for her.

That summer, Gertrude and baby Joyce met the King when he presented them with the VC that George had earned with his last living act. The King presented 32 Victoria Crosses that day (21 July 1917), of which eight were posthumous – most of these were presented to parents (including those of the air ace Albert Ball), Gertrude was the only wife to be handed the prestigious medal that day at Buckingham Palace. 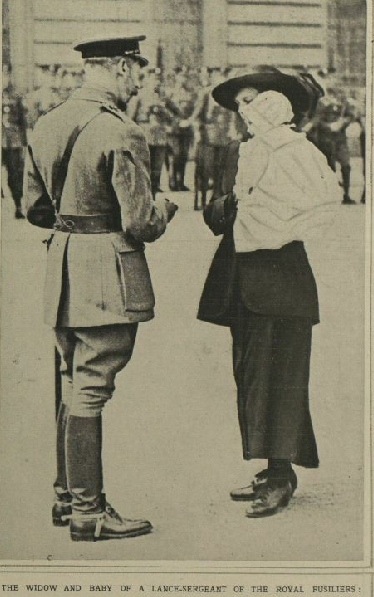 Sadly, there are very few records of the lives of women in the Great War – especially those who did not serve in the armed forces. How did Gertrude cope without George in the years after his death? She would have received a widow’s pension and his annuity that came with the VC, so hopefully she was financially secure.

It is tempting to think that war widows will remain forever faithful to the memory of their lost loves. It might even be thought that with so many men killed and disfigured that such women would be unable to find another man. It is rather heartening, then, to find that Gertrude Jarratt remarried a few years after the war – marrying Ernest William Pearce at the end of 1921. They had another daughter in 1933, but Joyce Jarratt kept her father’s surname. Baby Joyce, of course, grew up to be a woman and eventually she married as well, becoming Joyce Harwood in 1941 (not to be confused with the character played by Veronica Lake in the 1946 film Blue Dahlia).

Gertrude Jarratt’s war story touches on a few interesting themes about the war, particularly about civilian women’s knowledge about and responses to the conflict. Hers is a striking example of how civilians could (and did) hear about the horrors of war, even as it related to the death of their loved ones. She also seems to be an example of one for who did not let the traumas of the war govern the rest of her life; she remarried and (we must hope) lived a long and happy life as Gertrude Pearce.

Posted by Stuart on 23 March 2012 in Award-winners, Women