This week is the last chance to register to vote in the 2012 London mayoral election, assembly elections and (elsewhere) local council elections.  In 1918, a completely new electoral register was created as all men over 21, women over 30, and servicemen over 19 were allowed to vote. This register marks out those who were serving in the armed forces and allows us a snapshot of military service in the summer of 1918 when it was compiled. How many Londoners were serving? How did London compare with other regions?

Electoral registers (usually available to view in your local archives) can tell you the names of the adults lived in your house in any given year, as long as they could vote. In 1918, many men and a small number of women were marked as N&M voters – absent voters on naval and military service.

Out of a UK population of 45.2 million there were 12.9 million men and 8.5 million women eligible to vote in the next general election in 1918, which was eventually held in December (compared with just 8.4 million registered in 1915 under the old rules). The 3.9 million men registered as N&M voters made up 30.3% of all male voters. Only 3,372 women were N&M voters (perhaps due to the higher age requirement for female voters, or because many worked in the UK and so could vote as residents), 242 of them voters in London.

London had the highest proportion of voters in the forces, with 37.7%, compared to an English average of 32.8%.  Seats were divided into ‘county’ and ‘borough’ constituencies. These are the totals male voters and N&M voters: 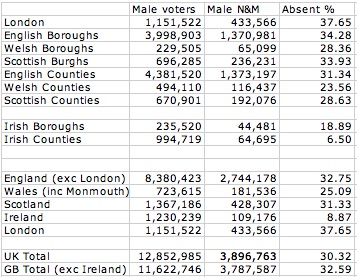 The Irish figures are low in part because there had not been conscription for the armed forces there, and because the war (and the UK in general) were far from popular in much of Ireland.

What this shows us is that at that particular point in time – summer 1918 – the proportion of London men were serving was greater than those of the constituent parts of the UK taken individually or collectively. There was a general trend that boroughs had more men serving, which makes sense as they would have had a greater surplus population of young men, e.g. those in the service sector or light industries who could easily be replaced by boys, old men or women. London, as a vast urban area, was the peak of this trend.

(Note that this was London as it existed in 1918, not as it is now – the absence rates for the bits of Essex, Surrey, etc, that bordered London were similar to those in the capital)

What does this tell us?  The figures do not include all those who had served in the war – those who were killed or demobilised were not listed as N&M. Those who were ‘missing in action’ were presumably listed as they might reappear in time for an election. Also some men who were able to vote as servicemen (from the age of 19) would not have had the vote as civilians (who could only vote from 21), so it is not strictly the proportion absent from the normal electoral role. What it does show is the general extent and pattern of absence of men on military service, after a year and a half of voluntary recruiting and over two years of conscription.

If you stop and think about what 37.7% of adult men being absent meant, it is quite a striking figure. More than one third. It was an even a greater proportion of young men as the servicemen were almost all under 50 and mostly under 40 years old. Over 433,000 young men (or probably over half a million including those who died or had been demobilised) had gone away to war, away from their homes, families, jobs, clubs, churches and pubs. Most returned in 1918 and 1919, but these figures tell us something of the dislocation of life in the UK and its capital during the Great War.

Posted by Stuart on 15 April 2012 in People, Recruitment