The defence of London from aerial attack is in the news this week. A group of tenants in East London is protesting about stationing of anti-air missiles on their block of flats during the Olympics. Ninety-five years ago, London was encircled by air defences for the first time – guarding against a much more obvious aerial threat: the German Gotha bombers.

The London Air Defence Area surrounded the capital with observers, guns, and fighter squadrons to defend Londoners from the attacking German air force. The Royal Observer Corps’s website gives a good brief history of the aerial defence of Britain. They describe the defences, devised by Major-General E.B. Ashmore, as follows:

The system; known as the London Air Defence Area (L.A.D.A) was fully operational by September 1918 and brought together units comprising coastal and inland observation posts, searchlight and gun stations; balloon aprons, aerodromes and emergency landing grounds into coordinated groups of twos and threes and which were connected to 25 Sub-Controls. Reports from the units were fed through to the centres and then onwards from the centres through to Major General Ashmore’s headquarters. As a result, the system met with some success and although it was not fully working until September 1918 (the last air raid took place on 19th May 1918) the lessons learnt provided valuable grounding for the later development of the Corps.

The official history of the Corps – which was formed in the aftermath of the Great War – also includes this map (reproduced on the website) showing the areas covered by the anti-aircraft guns and the patrolling lines of the Home Defence units of the newly-formed Royal Air Force: 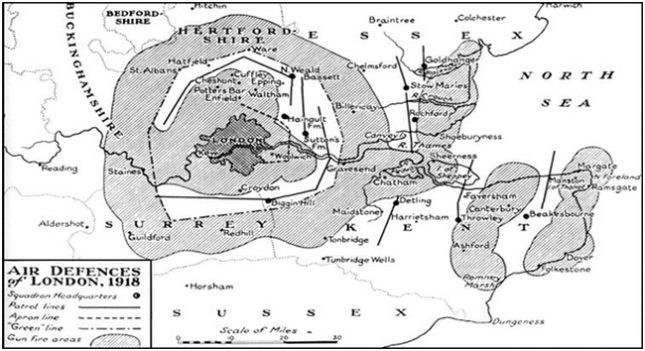 Today’s residents of East London may be uncomfortable about the presence of service personnel and missiles in their neighbourhoods. Back in the Great War the sight and noise of these defences – and the raids they were designed – must have been all the more frightening given that powered flight was only a decade old.

By the end of the War, many people had got used to the noise at least, though. One Essex priest living in the northern area of the defences (in Stondon Massey – diary in the Essex Record Office) commented that their flights had become a comforting presence and it was an odd sensations when they stopped after the war.