London was a key waypoint on soldiers’ journeys to and from the war. The city’s railway stations were filled with men in khaki making their way to and from their homes. Writer and soldier FH Keeling left us an account of servicemen’s travel around London getting to the early leave train from Victoria back towards the battlefields.

Frederick H Keeling (known as ‘Ben’), described in the Dictionary of National Biography as a social reformer, came from Colchester in Essex. After studying at Cambridge, he moved to London, worked on a London County Council care committee, knew the famous social reformers Beatrice and Sidney Webb well and became a committed member of their Fabian Society. After working in Leeds and travelling in Europe, Keeling again settled in London and worked at the New Statesman. He joined the Duke of Cornwall’s Light Infantry in August 1914 and quickly rose through the ranks. After being injured in 1915, he returned to the unit as a sergeant-major.  In early 1916, he returned to England on leave, travelling back to the front from Essex through Liverpool Street.

A letter of his (from his collected letters) describes his night in London:

The letter gives us an interesting insight into the peculiar journeys taken by thousands of men every week across London, on the way back to the leave train taking them back to the war. It also gives a bit of a sense of his feelings about the war, leave and death.

This will not be the last quotation I post from Keeling’s letters (edited and published by his ex-mother-in-law, with a foreword by HG Wells). He wrote eloquently about a number of subjects to do with the war. 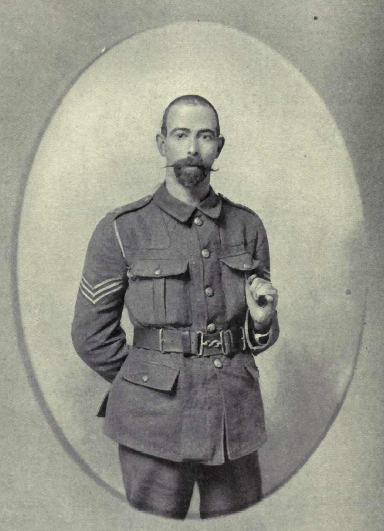 ‘Ben’ Keeling as a sergeant in the DCLI

That summer, the 6th DCLI – Keeling’s unit – was involved in the Battle of the Somme and Keeling was killed in action on August 18th. He was posthumously awarded the Military Medal for his bravery in action.

This ticket from the Great War Archive was issued to another soldier (Royal Engineers sergeant James Cross) and shows his early-morning departure time from Victoria. Keeling would have been issued a very similar form:

Ticket for the leave train. This item is from The Great War Archive, University of Oxford; © Mrs Jill Cross.

*In case you are wondering, I think that ‘Smith’s carts’ are something to do with WH Smith’s, who then – as now – had shops at the major London railway stations. I assume the carts delivered newspapers around the city – but I would be interested to know if anyone can confirm or correct this.

Posted by Stuart on 14 July 2012 in Ordinary Londoners, People

2 responses to “Overnight in London”