As you approach Stratford station on the train from London Liverpool Street, you will see the Olympic Park where the London 2012 games start tomorrow.  If you had done the same journey in 1914-15 and looked the other way, you would have seen a different group of foreigners: German nationals interned at the start of the Great War.

After war was declared in August 1914, many German men of military age who were resident in the south-east of England were interned by the authorities to stop them from go to fight for the enemy or acting as spies against Britain.  After a wave of anti-German violence in October 1914 and May 1915, more and more men were interned – and even more suffered from prejudice and restrictions on their movements where they were not interned (oddly, those in the Metropolitan police area were not necessarily interned).

One of the sites used to house these military-aged German men was a disused jute factory in Stratford. It was situated to the south of the railway lines and west of Carpenters Road. 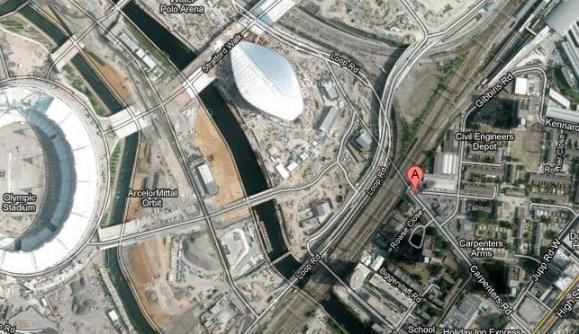 Google map of the site of the internment camp (south of the ‘A’ marker) and the neighbouring Olympic park. In the north-east corner is Stratford Station.

In March 1915, Revd Andrew Clark (on his way from Oxford to his home in Great Leighs, Essex) spotted a factory with a ‘to let sign’ and a group of men milling about in the yard – the German internees.

The site in 1916, from an Ordnance Survey map on old-maps.co.uk (The grey block in the centre is the Jute works/internment camp)

The camp was notorious among interned men. Rudolf Rocker heard of terrible conditions there, which he described in his autobiography (p204):

“The Stratford Camp and its Commandant had a dreadful reputation among the internees. News had spread of terrible things happening there. It was not always the fault of the British military administration. The German internal administration was as much to blame, particularly for a great deal of corruption that existed there. The head of the internal administration was a man named Weber, who seemed by all accounts to be a sadist, and did his best to make life in the camp impossible. We were told about a Sergeant Trinneman at Stratford, who was the Commandant’s right hand and practically ran the camp. He was said to be a brute.”

The Stratford Camp was opened in December 1914 and closed in 1917.  It was based in William Ritchie & Sons jutespinners’ factory on Carpenters Road. The factory was built in 1864 but closed down in 1904. There is a lengthy description of the site in 1876 here, stating that one thousand were employed there. (Two of William Ritchie’s sons were prominent – James became Lord Mayor of London while Charles became Home Secretary and Chancellor of the Exchequer.)

The story of Germans in the UK in the Great War is a largely unknown one (despite the efforts of Panikos Panayi in several books and articles). Few attending the Olympics this summer will know of the German men interned by the British authorities who lived under an oppressive prison regime just yards from the 2012 Olympics site.

7 responses to “Foreigners in Stratford”