This year’s Olympic Games is not the first to be held in London. One was held here in the wake of the Second World War in 1948 but the first was a few years before the Great War, in 1908. Many of the people and places involved were also involved in the war.  One of these was the Princes Ice Skating Rink in Knightsbridge, where the figure skating was held.

The rink was opened in 1896 on Hill Street (now known by the the equally-exciting name of Trevor Place) between Montpelier Square and Knightsbridge, just south of the Hyde Park Barracks. 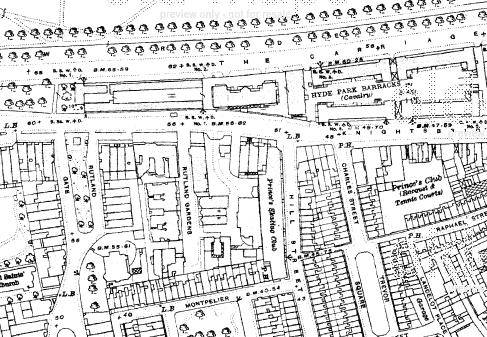 Princes Skating Club on a 1916 map from old-maps.co.uk

Of course, winter sports are not part of the modern Olympics. The first Winter Olympics was held in 1924, before which pressure to have figure skating and ice hockey meant that the skating was included in 1908 and both sports in 1920.

In 1908 Princes Skating Rink hosted the figure skating competition, in which Britain, Sweden, Germany and Russia all won gold medals (see the wikipedia page). The 1908 Team GB had 11 competitors and won two silver medals (for pairs and men’s special figures) and three bronze, as well as their gold for ladies singles. This was in keeping with the hosts’ dominance of the games – in which they won 56 golds, with the USA in second with 23 and no other nation winning more than eight.

The site was also occasionally for non-ice events, including a Women’s Exhibition run by the militant suffragist group the Women’s Social and Political Union (WSPU) in 1909 – the museum of London has photos from the event. (See pastscape for more on the rink’s history)

Ice hockey was suspended during the Great War and the skating rink was closed in 1917. The space was used for storage by the Red Cross. This painting by London artist Haydn Mackey shows it being used for this purpose, just one example of London’s public (or semi-public) spaces being used for the war effort: 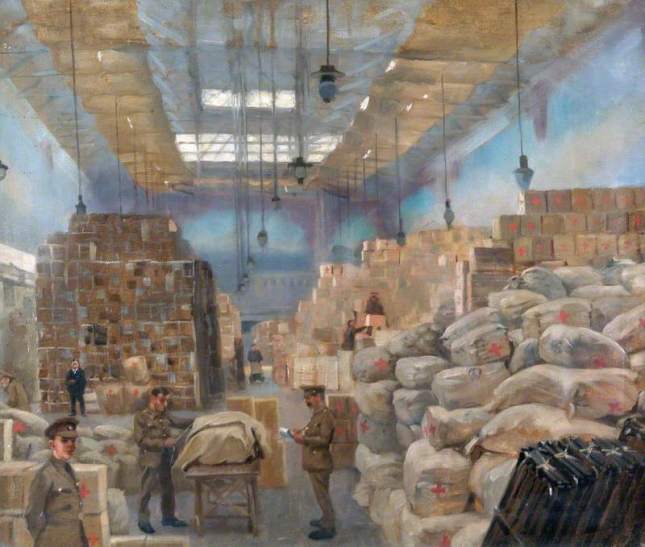