October is black history month in the UK. I will be including a few posts relating to black history and Great War London. First up is the most prominent black Londoner of the war, Walter Tull, and some of his fellow black British Army heroes of 1914-18.

Water Tull’s story is fairly well-known know, and is related in depth on websites including ‘Crossing the White Line’ (link). In short, he was born in Folkestone in 1888, the son of a Barbadian carpenter and his English wife. After both parents died while their children were young, Walter and his brother Edward were sent to the Children’s Home and Orphanage on Bonner Road, Bethnal Green. A keen footballer, the young Walter began playing for local Clapton FC in 1908-09 and was signed up as a professional footballer for Tottenham Hotspur the following season. Although he played well, racists incidents occurred at matches, and he was dropped from the first team. He found a new home, though, at Northampton Town FC, for whom he played 110 matches and scored 9 goals.

After the Great War began in summer 1914, there was much criticism of professional football for keeping men out of the army. In response a ‘Footballers’ Battalion’ was formed in the Middlesex Regiment (the 17th Bn) on 12 December. Tull was one of its earliest recruits, joining in London on 21 December and given the number 55. His rapid promotion over the next few months (lance corporal in February, corporal in June and lance serjeant in July 1915) is evidence of his leadership quality. The battalion – and L/Sgt Tull – arrived in France in November 1915, just in time for a freezing winter in the trenches. He served with them until April 1916 when he was admitted to a field hospital suffering from ‘acute mania’ and eventually sent back to the UK.

After a break in the reserve 27th and 6th battalions, Tull was clearly well enough to serve again and he arrived in the 23rd (2nd Football) Battalion on 20 September 1916, mid-way through the battle of Flers-Courcelette – part of the Battle of the Somme. He served with the unit through the battle of Le Transloy in October. In late November he filled out an application to be commissioned as an officer. A month later, his application was approved and he went to Scotland for officer training – despite a specific rule in Army Orders restricting officer status to men of ‘pure European descent’. He was the first black or mixed-race officer in the British Army.

Rejoining the 23rd Middlesex as an officer, Tull was popular and effective. The unit fought through the 3rd Battle of Ypres (Passchendaele) before being sent to Italy in November. In clashes on the river Piave, he was praised for his “gallantry and coolness” by Sir Sidney Lawford (commander of the 41st Division), who wrote described his heroism: “You were one of the first to cross the river prior to the raid, and during the raid you took the covering party of the main body across and brought them back without a casualty inspite of heavy fire.” He was recommended for the Military Cross, but was not awarded it. 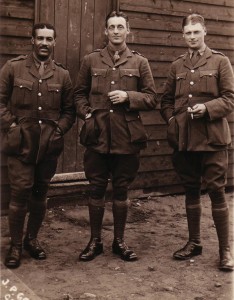 The 41st Division returned to France in February-March 1918, just in time for the German Spring Offensive, which was launched on 21 March. A few days in, during the First Battle of Bapaume, Tull was killed in action by a machine-gun bullet that hit him in the head. His body was buried by comrades, but as the Germans advanced the 23rd Middlesex retreated and the grave was lost. Tull is now commemorated on the Arras memorial to the missing. (A brother of his also died in the war: William, who is buried in Folkestone)

Walter Tull was an impressive man – coming from an orphanage to become a well-regarded officer is impressive enough, let alone doing so against a military law-book that denied non-white men the right to be officers. There is a campaign to award Tull the Military Cross posthumously, based on the assumption that it was denied purely because he was not white. While this may be the case, I find it unlikely that it was that simple – his commission was approved not only by officers who knew him but those (in administrative and training posts) who had never seen him in action, overlooking both his West Indian origins and his treatment for ‘mania’. The fact is that medals recommended were not always awarded: for example, Siegfried Sassoon was reportedly recommended for the Victoria Cross but did not receive it.

More pertinent to the Tull case is the intriguing example of Private John Williams, whose picture appeared in the African Telegraph in March 1919 with the title ‘The Man whom White Soldiers Call “The Black V.C.”.’ The caption then describes Williams as having been awarded the DCM, MM, Russian Cross of St George, French Médaille militaire and Légion d’honneur. He doesn’t appear to be wearing quite that many medals in the photo, but is certainly decorated and carrying four wound stripes. His ‘many brave deeds’ would supposedly have been enough to “earn any European the V.C.”

It is not clear whether Williams was British, West Indian or African, although having been honoured by the French he must have served in a British unit (rather than the British West Indies Regiment, which fought in the Middle East but only did support work in France and Flanders). It seems odd that his story has been forgotten while Tull has become a cause célèbre.

Another intriguing African Telegraph photo is this one – also from the African Telegraph – of ‘A West African Soldier “Walking Out” in London’. The story tells of the number of African soldiers in the British Army, who became known as “Coloured Army Knuts” (knut being a slang term for showy young men).

“Some of these young men left their studies to join the British Army upon the outbreak of hostilities and rendered a very good account of themselves in the trenches and fields of Flanders, many of them wear coveted distinctions, and one form Oxford University won the M.C. for a particularly daring deed with the Tank Corps.”

If this report is accurate (I have no reason to think it false, but have not been able to corroborate it with other sources), then there was a Military Cross awarded to a black man during the Great War. This man’s background – as an African at Oxford University – was very different to Tull’s, but he must have been an officer or at least a Warrant Officer to be awarded the MC. Who was this man?

Telling the stories of these decorated black soldiers in Britain’s Great War army is not an attempt to do down Tull’s story. He was very impressive and brave; we should remember him and his sacrifice. But we should not assume that his lack of reward for his bravery was necessarily due to racism. Nor should we forget the other black soldiers who fought with great bravery in the same army.

Update: since writing this, I have become aware of at least one black/mixed-race officer who was commissioned before Tull (and was also killed in action). Read more about G.E.K. Bemand on this blog post, where I tell his story and consider his and Tull’s parallel stories.

Posted by Stuart on 1 October 2012 in Award-winners, Ordinary Londoners

← Czechs in Great War London
The British Museum in wartime →