RSS
← Armistice Day pandemonium in Westminster
Bobs, the funeral of a national hero →

Cambrai and the bells of St Paul’s

On 23 November 1917, the bells of St Paul’s Cathedral rang out – for the first time in years – at the news of a great British victory. The advances of the previous week gave people a real sense that the British Armies were making progress on the Western Front. That feeling was short-lived. 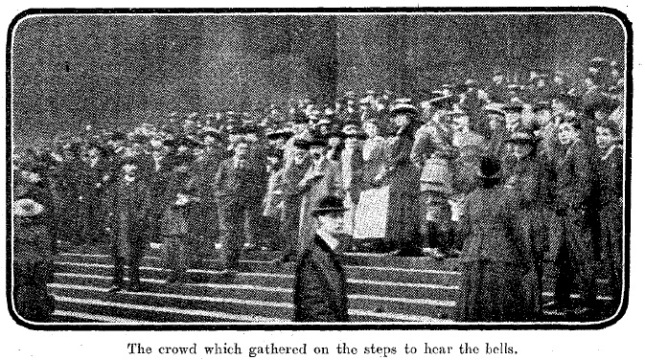 The joybells of the London churches to-day gave voice to the popular rejoicing at a great victory on the Western Front. It is the first time the peals have been rung since the outbreak of War. The victory was the success of the Third Army under General Sir Julian Byng in breaking through the Hindenburg Line to a length of ten miles and a depth of four or five near Cambrai. It is the best news we have had for a long time.

That was Michael MacDonagh’s description of the event. He went on:

I went up Ludgate Hill to hear St. Paul’s carillon starting the City chimes at noon. This carillon is rarely rung. It has not been heard since it celebrated the declaration of Peace after the South African War. There was a big crowd on the Cathedral steps and in the forecourt. After the clock had struck twelve, the big bell known as “Great Paul” – the bell that tolls for prayers – first boomed out, and was followed by the full peal of bells, twelve in number, which were a gift from the City Companies. The people cheered and cheered, exchanging greetings and smiles. The bells of the other churches, joining in with St. Paul’s, helped to swell the wings of sound carrying the joyful news to offices, shops and warehouses.

Thanks to the black out and other precautions against air raids had silenced Britain’s church bells at night. In Westminster, Big Ben had been silent since 1914. 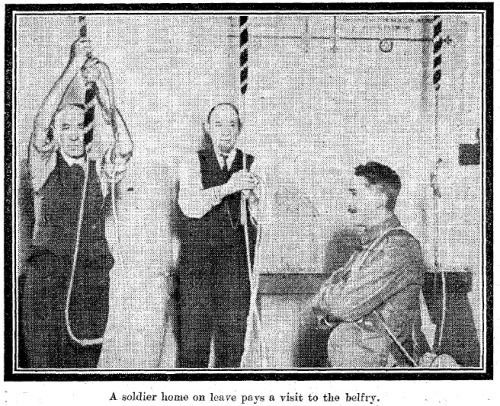 There really was a sense that victory was on the way. Georgina Lee, a solicitor’s wife in West London, wrote in her diary “Today I had my Union Flag flying for the first time to celebrate this Cambrai victory…For the first time, too, since the war began, the bells of St Paul’s and some other big churches rang a joyful carillon at midday, in honour of this first victory.”

The bells we not only rung in London, but across the country. In Essex, the church bells at Stondon Massey were rung for half an hour, while in Broomfield (near Chelmsford) a local man set off a wad of gun-cotton in celebration, making locals fear an air raid was in progress.

The attack was launched on the morning of 20 November, with 378 fighting tanks and their accompanying infantry advancing across trenches that the Germans had thought were impregnable. The attack on that day was enormously successful, breaching what the British called the ‘Hindenburg Line’ – to which the Germans had retreated to form stronger defences earlier in 1917 – for the first time.

It was a limited success, though. Further advances were much harder and (as throughout 1916 and 1917) the hoped-for breakthrough failed to materialise.  In the end the British army was left with a salient sticking out into German-held territory without an obvious defensive position.

On 30 November, the Germans launched their counter-attack. By the time the fighting had ended, they had recaptured virtually all the land lost over the previous ten days, at great cost to the British and Imperial troops. In the end the two sides ended up virtually where they had started, each with a successful attack, a failure to make a breakthrough and losses of around 45,000 men to show for it.

British tanks salvaged by the German Army after the Battle of Cambrai are prepared for transportation to repair shops in the German rear area. © IWM (Q 29882)

By 12 December, it had become clear in London that the great victory of late November had been reversed by the German counter-attack. Michael MacDonagh again:

London lies to-day under a cloud of despondency. We are told that the advance of our troops on the Western Front, over which we were rejoicing the other day, has been turned by the enemy into a retreat. Most of the ground gained is lost; thousands of our men have been killed or maimed and thousands made prisoners. What makes the news the more staggering is that it has for gloomy background the picture of one Ally, Italy, with a broken arm, and another, Russia, disappearing into the darkness of a Communist revolution. Yes, history does repeat itself. The words used by Horace Walpole in the eighteenth century have a direct application in the twentieth. “They are ringing their bells to-day; very soon they will be wringing their hands.”

1917 had been proclaimed as the ‘year of victory’. The reverse at Cambrai finally showed that it was not going to be, and indeed that it did not appear to be bringing peace any closer (despite the arrival of the USA in the war). Georgina Lee wrote in her diary as early as 2 December “the war seems farther from its end than it did three years ago.”

At Talbot House, in Poperinge, the annual debate on whether the war would end by the end of the coming year had registered a strong ‘yes’ vote in 1916 and 1917; held again in early 1918, the vote produced a tie – with only the chair’s casting vote producing an overall affirmative resolution that the war would end in 1918.

Thanks to David Underdown for the correction about the silent bells.

Posted by Stuart on 23 November 2014 in Uncategorized

← Armistice Day pandemonium in Westminster
Bobs, the funeral of a national hero →

3 responses to “Cambrai and the bells of St Paul’s”