Separation in wartime meant that many servicemen and women must have missed the deaths of their parents or siblings, or the births of new family members, at home. One soldier from Forest Gate was lucky enough to be granted special permission to go home to his mother’s sick bed.

Eliza Georgina Benison married civil engineer Alexander van Ransellaer Thuey in 1877 and they raised eight children, first in Stevenage and later in Forest Hill. Alexander died in 1902, but the family were living at 1 Sidney Road, Forest Gate in East London in 1911. Alexander junior (the eldest son) and his wife and son (also Alexander) lived there along with Eliza and five of her other grown-up children (Johnny, whose name is crossed out on the census form, was boarding in nearby Courtenay Street with his employer, a grocer). Shortly after the census was taken, Eva married an Adolphus Herbert Fiford from the Isle of Wight

When war came, the three Thuey brothers all joined up.  John joined the Essex Regiment on 8 March 1915, Alexander enlisted in the Army Service Corps as a motor driver on 29 May 1915, and Cecil joined the Royal Field Artillery – I’m not sure of the date, but he was a Corporal by the end of 1915, serving on the Western Front. Someone called Herbert A Fiford served in the artillery during the war, it seems likely that this was Eva’s husband.

Alexander Thuey had gone to the Western Front (via India, after enlisting at Grove Park) in September 1915. On 21 November 1915, he was at Armentieres when he was seriously wounded in action – his service record lists his wounds as GSW, i.e. gun-shot wound, a generic term that could include shell fragments to his left foot, head, Hand and abdominal wall.

Eliza collapsed in shock when she heard that her eldest son was badly wounded. According to newspaper reports, she was “crying out day and night for sight of her boy” (whether this meant Alexander or Cecil is not clear). The family feared that she was dying.

When he heard about his mother’s condition, Cecil immediately requested leave from his unit to go and be with her. It was refused. Another letter, countersigned by their doctor (a Dr Goodson) also had no effect. Desperate to get her brother home, Eva Fiford then wrote to the King, explaining the situation. 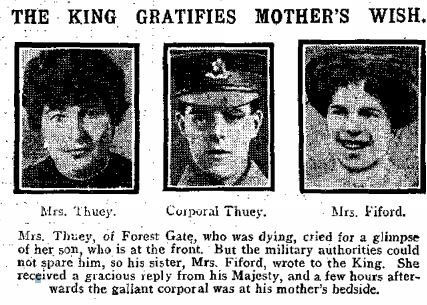 Remarkably, the King replied positively – or rather B.B. Cubbitt (later Sir Bertram Cubbitt, vice-president of the Imperial War Museum), a senior official at the War Office, wrote to her saying

Madam – In reply to your petition to the King, which was forwarded on to this department, I am commanded by the Army Council to acquaint you that a telegram has been sent to the military authorities over-seas that leave may be granted to your brother, Corporal C. Thuey, R.F.A., as an exceptional case. – I am your obedient servant, B.B. Cubbitt

So, Cecil Thuey, who had apparently concluded that he would never see his mother alive again, was woken in the night and told that he was allowed to go home. He then rushed back and his presence apparently had a huge restorative effect on his mother, who recovered and survived her illness. Cecil returned to the front in late January 1916.

In September 1916, Alexander Thuey was discharged from the army suffering from bronchitis, which had developed prior to the war but was aggravated by his active service. Sadly, he then died on 2 October 1918, leaving Gertrude a widow.

Having served on the Western Front in the Essex Regiment in 1916-17, John Thuey transferred to the Royal Flying Corps as a driver in February 1918 and thus joined the Royal Air Force when it was founded in April that year. He served with his unit in South Russia from April 1919 until March 1920, after which he left the RAF. He and Cecil both survived their military service: John died in 1943; Cecil married Neva Oxley in 1918 and lived until 1975.

Eliza Thuey died aged 61, towards the end of 1919, a year after her eldest son had passed away and while her youngest son was still absent on military duties. I hope that Cecil and his sisters and sister-in-law were able to be there for her at the end, as they had been when she was ill four years earlier.

A wartime blow to world Esperanto

In the communal cemetery at Forges-les-Eaux in France there are 18 Commonwealth War Grave Commission headstones, five of them dating from the Great War. Under the name of British officer Captain H.B. Mudie, one of them bears the unique inscription “Filantropo Prezidanto De Brita Kaj Universala Asocioj De Esperanto”*. 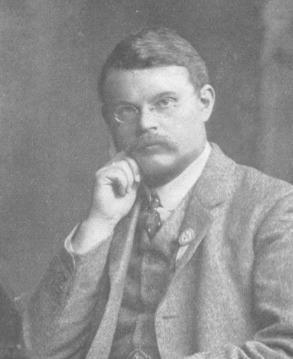 The man in question is Harold Bolingbroke Mudie, who was born in London in 1880. He was the son of Alfred and Annie Elizabeth Mudie; they were part of the family of Mudies who ran Mudie’s Circulating Library in the 19th Century. Young H. Bolingbroke Mudie (as he appears to have been known) was educated at Folkestone and at University College School (in north London); he then studied at London University before going to work in the Stock Exchange.

“Speaking several languages he added the International one in 1902, and single-handed founded and edited the “Esperantist” [a journal of the language] in 1903. He organized and controlled the famous International Congress at Cambridge in 1907, where only Esperanto was spoken. He published the New Testament in Esperanto through the British and Foreign Bible Society. Professor Mayor, of Cambridge, in eulogizing Mudie, said: “It is not only his talent—we have plenty of that here—but wisdom, which is very rare in so young a man.” ”

In 1914, war came to Europe and Mudie went to war. According to the Stock Exchange Memorial Book,

“When war broke out he immediately gave his services. He acted first as recruiter, lecturer, journalist. Then he conveyed horses to the Belgian Government: and of his report, containing “Suggestions for Transport of Horses,” General Sir W. H. Birkbeck, K.C.B., C.M.G., Director of Remounts, wrote: “It was a gem in its way; and he was given a commission at the earliest opportunity.””

Mudie was commissioned into the Army Service Corps in October 1914 and set up a Remount Depot near Forges-les-Eaux in France. According to a notice about him in The Times, he was fluent in French, German and Flemish, which was useful for a man in his role – providing horses for the army. Presumably his Esperanto was rather less useful at this point.

Mudie returned home on leave over Christmas 1915 and went back to the Western Front on New Year’s Eve. On 6 January, he and another officer were being driven in a motorcar at night reached a level crossing on the line between Rouen and Serquex. The car was hit by an express train, which destroyed it, injuring the other officer and killing both the French driver and Captain Mudie outright (for some reason the Daily Mirror’s coverage of the accident calls him ‘Captain Mudge-Mudie’). 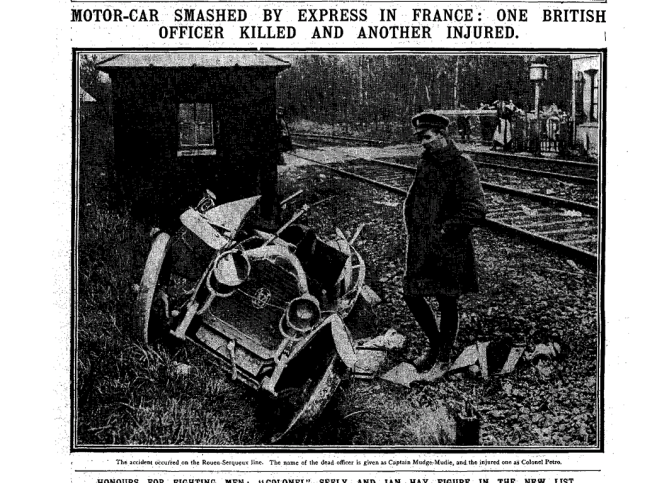 The remnants of Mudie’s car by the railway tracks, Daily Mirror 14 Feb 1916

Mudie was buried with honour in the town of Forges-les-Eaux. 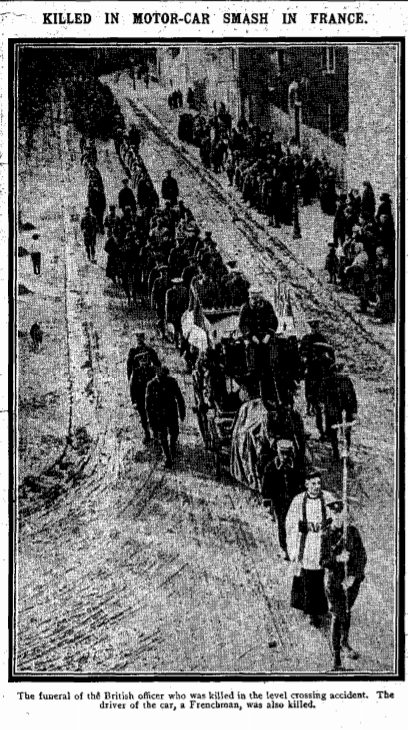 On his gravestone are those wordsr “Filantropo/ Prezidanto De Brita Kaj/ Universala Asocioj De/ Esperanto”, which google tells me means “Philanthropist/president of British and /universal associations of/ Esperanto”. It took until after the war, three years later, for the Univeral Esperanto Association to appoint a successor as president.

Mudie’s story tells us something of the variety of things that people did in the military during the war – and the variety of ways in which they could be killed or wounded. It is interesting to note that such a committed internationalist was also so keen to be involved in his nation’s war effort. With his death, the British Army lost a useful linguist and logistics officer, and the cause of Esperanto lost one of its leading figures.

*The War Graves Commission allowed the next of kin to write a short message under the regimental emblem or cross on their otherwise standardised headstones. The CWGC website has a record of these in the additional documents recently made available on the page for each casualty the Commission commemorates.

Posted by Stuart on 6 January 2016 in Uncategorized