The coronavirus/covid-19 pandemic is not like the First World War. There are a whole host of ways in which they are different, but there are ways in which life over the last month or so has echoed features of life in Great Britain – and London in particular – in 1914-1918. I’ve already mentioned one in my previous post – the closure of major museums in London (which I covered in an earlier blog post). Let’s take a look at a few more:

You may have seen a recent news story that the Olympia in Kensington has “been turned into a huge foodbank centre” in response to the coronavirus crisis.  The pictures accompanying the story (borrowed here from MyLondon) made me think of the images of the same space used a century ago as a storage space for the Army Clothing Depot: 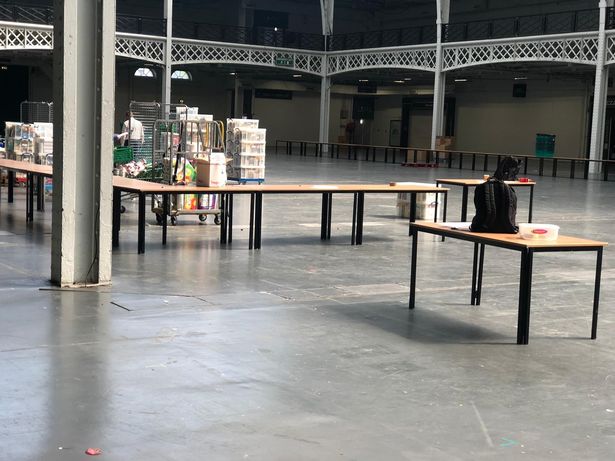 The foodbank story is also reminiscent of the efforts to help feed working people who might not be able to afford – or have time to prepare – full meals. Public kitchens were opened from 1917 onwards, and we widely known as ‘municipal’ or ‘national’ kitchens (not ‘communal’ kitchens for fear of suggesting a communist influence in the era of the Russian revolutions). At these kitchens, working people were able to buy a full hot meal at cost price, or cooked potatoes to take home as part of their meal there.

Sylvia Pankhurst and the Women’s Social and Political Union had opened similar kitchens in poor districts early in the war, but they did not catch on until 1917, when the Queen opened the first ‘national kitchen’ on Westminster Bridge Street. The kitchens enabled people to eat there or, more often, to take full meals – or significant portions – away to eat at home. 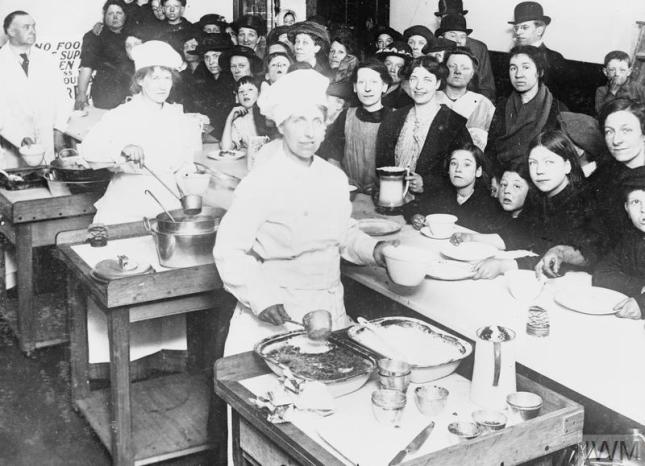 Then: A long queue of children and women awaiting their turn to receive hot food at the public kitchen at 104 Westminster Bridge Road, London, opened by Queen Mary. Copyright: © IWM (Q 54564)

Supporting those on the front line

Speaking of food…many charitable efforts have been launched at a local and national level to provide for those on the frontline – particularly the doctors and nurses and other workers in the NHS – while restaurants and cafes are shut. The most prominent is probably the #FeedNHS campaign, supported by celebrities like Damian Lewis, Helen McCrory and Matt Lucas, but there have been a range of similar efforts across London and elsewhere across the UK to provide free or discounted meals (see more in this Evening Standard story).

A similar spirit drove the provision of free buffets at the major London terminal stations for service personnel travelling to and from the battlefields during the Great War. Following appeals in the papers for something to be done to greet those arriving on leave, groups of ladies volunteered to run free buffets. The first was set up at London Bridge in late 1914, followed in early 1915 by Victoria and Liverpool Street; soon there were buffets at all of the major termini.

These buffets supplied a hot drink and a meal to men as they arrived in London or waited for their train back to the front. They were also useful for the London Ambulance Column volunteers who met trains full of wounded and could end up spending the whole day or night either in the station or on the road. By the time it was closed in April 1920, the buffet at Waterloo (located in a pedestrian tunnel under the platforms, and commemorated there by a memorial plaque) had served meals and refreshments to eight million service personnel; at Victoria they had served 12 million.

Then: British troops celebrating Christmas meal with staff at the free buffet on Euston station, probably 25 December 1917. Note a soldier pulling a Christmas cracker with a boy with a dog. Copyright: © IWM (Q 54274)

One of the major news stories of the current crisis has been the new Nightingale hospitals opened across the country, starting at the ExCel centre in London.

Now: The Nightingale Hospital in the Excel Centre (from Bloomberg news)

Perhaps unsurprisingly, the Great War saw an enormous increase in London’s hospital capacity. From only seven thousand before the war, the number of military hospital beds in the UK rose to 364,113 by the time of the Armistice. London housed 36,664 of these beds, slightly over ten percent. This included beds in five ‘General Hospitals’, mainly in South London.

These were made up of existing hospital buildings, other public buildings, new temporary huts and other local buildings given over to the war effort. For example the 2nd London General Hospital in Chelsea (with over 1,500 beds) was made up of St Mark’s College, an LCC Secondary School and beds in four civil hospitals (Central London, Freemasons’, Great Northern, St Andrew’s). The others were in Camberwell, Wandsworth, Denmark Hill and Lambeth. 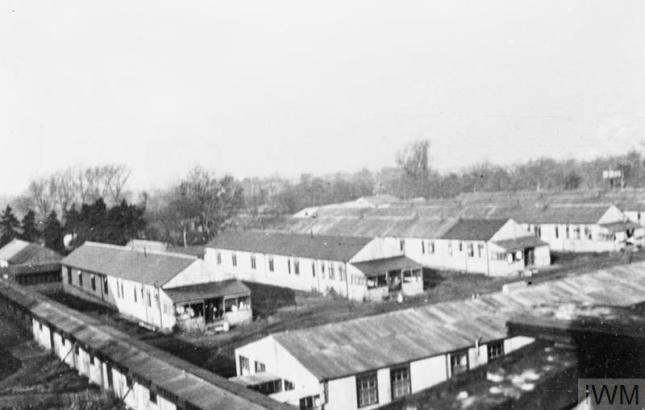 Twelve thousand more beds were provided in fourteen hospitals housed in poor law buildings, infirmaries and workhouses. Five more hospitals were housed in pre-war hospital buildings, including the Maudsley in Denmark Hill and fever hospitals in Woolwich and Tooting.

A range of private hospitals, paid for by charities and individuals, housed more men, especially convalescents. Many wealthy individuals turned their London houses over to become hospitals and convalescent homes, particularly in the wealthy areas of Central and West London, where residents had rooms (or whole houses) spare to cater for recuperating patients.

In March, TfL announced the closure of 40 tube stations that were not intersections between lines. 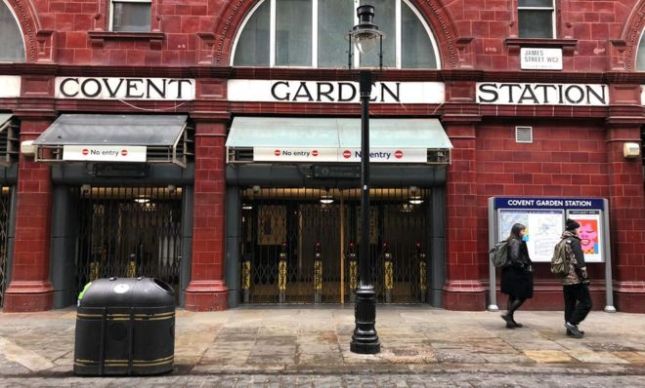 Covent Garden station, one of 40 shut during the lockdown – Picture copyright BBC

During the First World War, it was overground train stations that were closed. Wikipedia lists over 30 stations that were closed during the war years, many of them never to reopen – including a station south of Shepherd’s Bush Green, and a whole branch line from Nunhead to Greenwich Park (the latter station having now disappeared without trace). Some did reopen, however, including Honor Oak, Brentford and Shadwell & St George’s East.

The main reason for closing all of these stations was the lack of passengers using them – the rather haphazard growth of the railways in the nineteenth century meant that there were many lines with few users. There don’t appear to have been any closures of tube stations, although a planned extension of the Central Line to Richmond was cancelled, having been postponed by the war.

The crisis can reach any family, even in No 10

There was a real sense of shock a few weeks ago, when the Prime Minister was admitted to hospital suffering from covid-19. Combined with the earlier news that the Prince of Wales had had the disease, it demonstrated that it could strike anyone (even if it is not evenly distributed among the population) .

Similarly, wartime Prime Minister H.H. Asquith suffered the anguish shared by many of his contemporaries when his son Raymond was killed in action serving in the Grenadier Guards at Ginchy on 15 September 1916, at the Battle of Flers-Courcelette.

Then: Start of the report of Lt Raymond Asquith’s death in the Birmingham Mail, 19 Sept 1916 (Copyright British Newspaper Archive)

One of the words to gain prominence during the Great War were ‘queue’ and ‘queuing’. Although they pre-dated the war, they were not previously common parlance. Just as we have become newly accustomed to talk of PPE and people being immuno-compromised, our ancestors came to talk of queues, no-man’s land and a host of other new terms.

The Walthamstow Gazette published a poem by “A.B.F.” about queues in early 1918, when the food queues were at their peak:

Q stands for Quest of a Quarrelling Queue,

Things are unequal for me and for you.

Q for the Quarter of butter or “marge,”

Also for Quantity little or large.

Q for the Question on which all agree,

Have they butter or margarine, sugar or tea?

Quotidian Queues must Quickly be Quashed!

“Queenie” and “Quartos” have lined up as well,

‘Tis “Queer Street” for children – the Queue we MUST Quell.

Cute their Cupidity for getting the Cue,

Quarters and half-pounds they buy not a few.

The “powers that be” no one can excuse

For letting the “multiples” encourage Queues.

Multiples was the word in that era for chain shops – by contrast to individual shops that were the norm. As was the case when certain foods seemed to run short in March 2020, the problem as more one of distribution than of supply. ‘Multiples’ were blamed for the queues, presumably because they were where the queues formed, which was because they actually had stocks of the food people wanted – their supply chains being more resilient than individual butchers’ or dairies’ were.

One weekend in January 1918, over a thousand people queued outside a multiple shop in New Bond Street for margarine and around 3,000 in Walworth, a thousand of the latter going away empty-handed. By the end of the month, an an estimated half million people were queuing for food across London. In many places at this point, local councils commandeered supplies being delivered to multiples (particularly the Maypole Dairy) and distributed them around their area to disperse the queues. In the end it was rationing – first in London and the Home Counties at the end of February, then across the country – that quelled the queues.

With our social distancing, our queues now look rather different of course:

Now: customers queue outside Waitrose (image from the Guardian)

Posted by Stuart on 24 April 2020 in Uncategorized

While we are all cooped up at home, I am planning to resume this blog. I can’t promise a huge amount of new content, but I plan to post a few new articles and update some old ones. So watch this space.

For the time being, here is a reminder that this is not the first time that London’s museums have closed to the public:

Posted by Stuart on 6 April 2020 in Uncategorized