After the Royal Air Force was formed in April 1918, four new medals were created: the Distinguished Flying Cross and the Distinguished Flying Medal, for officers and medal respectively who distinguished themselves in action against the enemy, and the Air Force Cross and Medal for courage and dedication other than in the face of the enemy. One Londoner earned the DFM twice as an observer ace who shot down 22 German aircraft in 1918: Arthur Newland.

Arthur Newland’s record as an observer-gunner is outstanding. After arriving in France on 19 March 1918, weeks before the formation of the RAF, he qualified as an observer on May 19th – the day that he got his second aerial victory!

Flying with the American Iaccaci brothers as his pilots in the Bristol Fighters of No 20 Squadron, Newland became an ‘ace’ by the end of May, having shot down more than five enemy aircraft. His six victory came on 31 May and his ninth on 30 June, all but one having been German fighter aircraft.

These early victories earned him the Distinguished Flying Medal, which was awarded to him in August. The citation (published on 21 September) read:

He is an excellent shot, and has done remarkably well as an observer, gaining the confidence of the pilots with whom he has served. He has personally assisted in shooting down five enemy aeroplanes.

Paul Iaccaci was awarded the DFC on the same day for destroying six enemy aircraft, of which he had personally shot down two, his observers (including Newland) the other four. 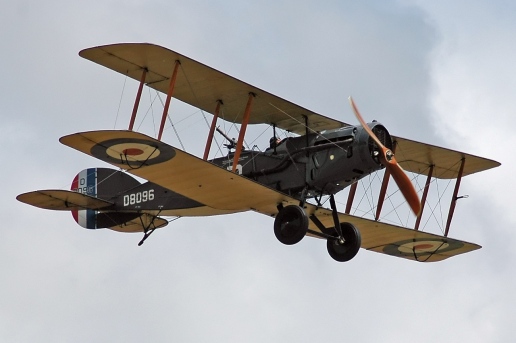 August 1918 marked the beginning of the end of the war, at least in hindsight. The Allies launched the campaign in France and Flanders that brought the Armistice within a hundred days.

August was also a peak period for Arthur Newland the marksman observer, although flying with different pilots. From 14 to 22 August, he shot down six more enemy fighters, including three on the 21st alone (although two were shared victories with other crews).

Again, he was rewarded for this stunning display, the citation of his second DFM reading:

According to The Aerodrome.com, Newland was one of only two airmen to earn a second DFM during the Great War (i.e. a bar to his original honour). In September, again flying with Paul Iaccaci he added a further seven victories to his tally – all of them Fokker DVII fighters.

In early October, though, Newlands began to suffer from ‘flying sickness’ and was sent to a hospital at Wimeraux on the coast, and then on to Hampstead to recover. He never returned to the front, although he stayed in the RAF until early 1920, when he was – naturally enough – assigned the trade of ‘aerial gunner’. He was demobilised in July 1920, still suffering from his flying sickness.

Contrary to what the otherwise excellent The Aerodrome website says (which is repeated on Wikipedia and even in a book on Bristol Fighter aces), Newland was not in his thirties when he fought his aerial battles. He was born in January 1899, the eldest son of Frederick and Sarah Newland of Enfield; he was a fresh-faced, dark-haired lad, standing 5’ 10” tall. Frederick Newland worked as a machine hand at the Royal Small Arms Factory – as did Arthur’s Enfield namesake Arthur Ernest Newland, with whom other websites seem to have conflated the real observer ace.

As a civilian again, Newland returned to his parents’ home in Enfield, before marrying Olive Keene in 1929 and moving back to Elmhurst Road. Later in the thirties they moved to 21 Sedcote Road, where they lived into the 1960s. Arthur Newland DFM & bar died in 1973, in Enfield.

Observer Sergeant Arthur Newland flourished as an observer gunner in his half year on the Western Front. He was clearly an excellent marksman with the Lewis gun (or guns, it seems to have varied) used by an observer in the Bristol Fighter. Other-ranks observer gunners are not the airmen we picture when we imagine Great War flying aces, but there were a large number of them who became aces, especially in the latter stages of the war.

The Aerodrome.com’s page on Newland, although inaccurate on his pre-military life, is an excellent source of information about his victories and awards for bravery – as it is more generally for the other Great War aces.

Posted by Stuart on 3 April 2013 in Award-winners, Ordinary Londoners