London and the recruiting boom

Recruitment to the army is one of the defining images of 1914 in Britain and in London in particular – Kitchener’s call to arms and the queues outside recruiting offices. A week-by-week breakdown of recruiting rates reveals that the pattern of enlistment in London was not quite the same as across the UK as a whole. 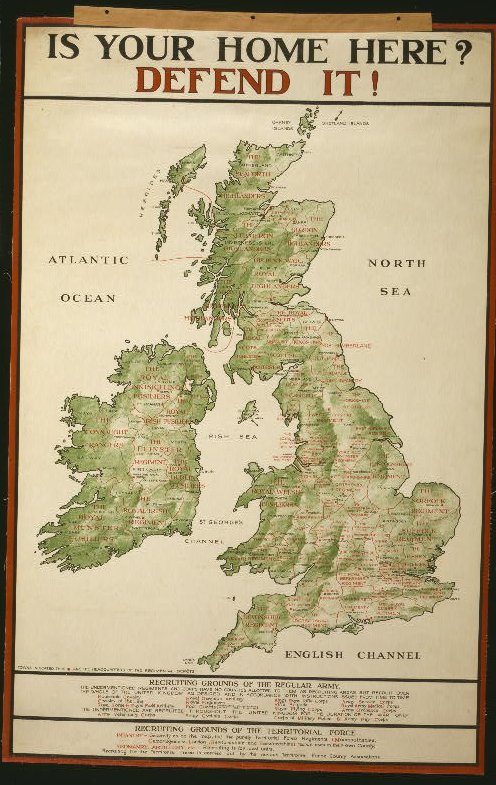 “Is your home here? Defend it!” A 1915 poster depicting the recruiting districts in the UK (Library of Congress archive)

September 1914 was the peak month for recruitment to the British Army during the Great War. Half a million men joined the army during the month, most of them during the first week and a half. On 11 September, the army increased its physical requirements of recruits. This (possibly coinciding with a natural end to the extreme levels seen after the news from Mons arrived at the end of August) resulted in a very rapid decline in recruiting. Over 190,000 men joined up nationwide in the first week of September, but only 40,000 did so in the week of the 15th to the 21st a fortnight later.

London’s recruiting pattern was basically the same as that of the UK as a whole, with the peak weeks of recruitment being the first two weeks of September, followed by a decline. An interesting facet of the figures, though, is that the peak was less pronounced in London than in the UK as a whole. One way to observe this is that the peak weeks (1-7 and 8-14 September) saw London’s recruits make up a smaller proportion of the UK-wide figure than in any other week in August or September (see graph below). Overall, just under 18% of August’s recruits came from London and just under 15% of those who joined up in September.

Weekly recruiting rates for London and that figure as a percentage of the UK enlistments that week, Aug-Sept 1914

Another way, that tells a different aspect of the story is that of the men who enlisted across the UK in the period 4 August to 28 September, a third joined up in the first week of September. For London alone, the figure is 25%.

London’s peak of recruiting was very large, but it was less extreme compared to the weeks either side of it, when London provided proportionately more of the nation’s recruits. Historian David Silbey (in his book The British Working Classes and Enthusiasm for War in 1914-1916) describes the recruiting boom as behaving like a ripple coming out from London in August and early September, with London disproportionately affected in August.

The pattern after September was not even. In October, over 22% of all recruits came through the London recruiting district (which covered the Metropolitan area of Greater London, not just the county of London as it existed in 1914). The figure fell below 15% for the next three months, before settling around 18-23% for the rest of 1915. From the 1915 average of 20%, the proportion fell under conscription to around 14.5-16% in the remaining years of the war. The wartime average was 17%.

So, what does this tell us? First of all, it tells us that the pattern for recruitment was different in London to the UK as a whole, with more enlistments in the first weeks and less of a pronounced peak in early September. Second, it tells us that around 17% of recruits came through the London district, which is around what one would expect for a region (Greater London) housing around 7 million of the nation’s 44 million people.

Note on War Office recruiting figures: the figures for August and September do not tally exactly between the daily and monthly returns. The daily figures have been used here for August and September – allowing for a weekly breakdown – the monthly figures are quoted from October onwards. The proportions of recruits brought in through the London recruiting district were broadly the same though: 18.5% in August 1915 and 14.63% in September in the monthly return, compared with the above-quoted daily return figures of just under 18 and 15% respectively.

Posted by Stuart on 28 September 2014 in Recruitment

The first week of September was the peak of the recruiting boom in 1914, in London no less than in the rest of the UK. Nearly 200,000 men joined the armed forces in that week, including over 21,000 in London.

One of our abiding memories of 1914 is the recruiting boom or ‘rush to the colours’. Contrary to some popular impressions, this was not simply based on some notion that the war would be ‘over by Christmas’.  The peak came after the news arrived at home that the British Expeditionary Force had suffered great casualties at Mons and were now in retreat. People rushed to the colours at the moment of utmost danger, not because they all thought it was going to be a brief, glorious lark.

Looking at each of the first nine weeks of the war from the declaration of war on Tuesday August 4th, it is clear that the peak came in the fortnight after news from Mons arrived. This news was not the only factor: the increase in unemployment in wartime, a general sense of duty, and for some a sense of adventure also played a part, among other individual factors affecting each man joining the army that summer. However, the timing suggests that the risk of defeat (and fear of invasion) played a large part.

It is worth remembering that even the recruiting levels in August were vast compared with peacetime. In each of the last few years of peace, between 25,000 and 30,000 men had joined the army (including Territorials) each year, between 4,000 and 5,000 of them in the London recruiting district (which included areas that were then in the surrounding counties but are now in London, such as Stratford in East London/Essex). Every week from 11 August to 21 September saw a larger intake than each of the preceding years had done – the peak week of 1-7 September brought in more than six times the peacetime level of enlistments!

If we look at the daily figures we can see that it was the middle of that week that saw the absolute peak nationally, with over 27,000 enlisting on Wednesday 3rd and over 29,000 on both Thursday 4th and Friday 5th. 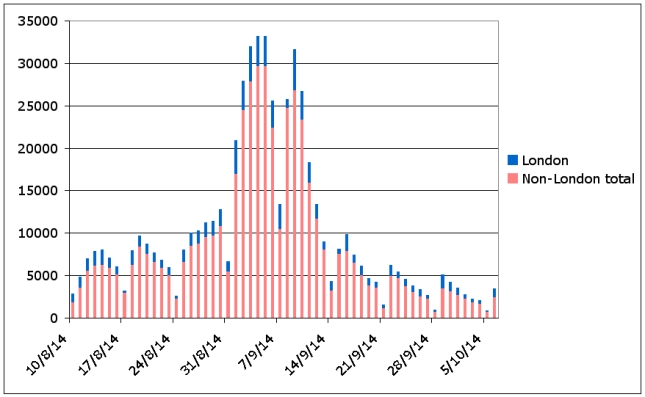 Interestingly, though, the peak days in London were slightly different. In fact the peak day here was Tuesday the 9th, when 4,833 men joined up in the London recruiting district (more men than had enlisted here in the whole year up to the end of September 1912). The only other days when over 4,000 joined up were Tuesday 1st and Wednesday 3rd. It is not clear why these dates were the peaks, but local fluctuations in towns and cities could be based on an intensive local recruiting effort (such as a large meeting or campaign by a local army unit) or the effects on local employment of the war, or indeed of the weather or seasons – such as the end of harvest in the countryside.

The recruiting boom of 1914 was a unique event in British history, with hundreds of thousands of men joining the armed forces (and particularly the army) in the space of a few days. It is a poignant moment in retrospect as we know about the battles that faced these men over the next four years. Those men who joined up in August and September 1914 fought, and many died, in some of the most famous and bloody battles in British history.

We can look at the statistics and timing and get some sense of why so many enlisted at that point, but each man’s story up to the point that he entered the recruiting office was unique, just as each man’s experiences after enlistment were different.

Posted by Stuart on 7 September 2013 in Recruitment