Separation in wartime meant that many servicemen and women must have missed the deaths of their parents or siblings, or the births of new family members, at home. One soldier from Forest Gate was lucky enough to be granted special permission to go home to his mother’s sick bed.

Eliza Georgina Benison married civil engineer Alexander van Ransellaer Thuey in 1877 and they raised eight children, first in Stevenage and later in Forest Hill. Alexander died in 1902, but the family were living at 1 Sidney Road, Forest Gate in East London in 1911. Alexander junior (the eldest son) and his wife and son (also Alexander) lived there along with Eliza and five of her other grown-up children (Johnny, whose name is crossed out on the census form, was boarding in nearby Courtenay Street with his employer, a grocer). Shortly after the census was taken, Eva married an Adolphus Herbert Fiford from the Isle of Wight

When war came, the three Thuey brothers all joined up.  John joined the Essex Regiment on 8 March 1915, Alexander enlisted in the Army Service Corps as a motor driver on 29 May 1915, and Cecil joined the Royal Field Artillery – I’m not sure of the date, but he was a Corporal by the end of 1915, serving on the Western Front. Someone called Herbert A Fiford served in the artillery during the war, it seems likely that this was Eva’s husband.

Alexander Thuey had gone to the Western Front (via India, after enlisting at Grove Park) in September 1915. On 21 November 1915, he was at Armentieres when he was seriously wounded in action – his service record lists his wounds as GSW, i.e. gun-shot wound, a generic term that could include shell fragments to his left foot, head, Hand and abdominal wall.

Eliza collapsed in shock when she heard that her eldest son was badly wounded. According to newspaper reports, she was “crying out day and night for sight of her boy” (whether this meant Alexander or Cecil is not clear). The family feared that she was dying.

When he heard about his mother’s condition, Cecil immediately requested leave from his unit to go and be with her. It was refused. Another letter, countersigned by their doctor (a Dr Goodson) also had no effect. Desperate to get her brother home, Eva Fiford then wrote to the King, explaining the situation.

Remarkably, the King replied positively – or rather B.B. Cubbitt (later Sir Bertram Cubbitt, vice-president of the Imperial War Museum), a senior official at the War Office, wrote to her saying

Madam – In reply to your petition to the King, which was forwarded on to this department, I am commanded by the Army Council to acquaint you that a telegram has been sent to the military authorities over-seas that leave may be granted to your brother, Corporal C. Thuey, R.F.A., as an exceptional case. – I am your obedient servant, B.B. Cubbitt

So, Cecil Thuey, who had apparently concluded that he would never see his mother alive again, was woken in the night and told that he was allowed to go home. He then rushed back and his presence apparently had a huge restorative effect on his mother, who recovered and survived her illness. Cecil returned to the front in late January 1916.

In September 1916, Alexander Thuey was discharged from the army suffering from bronchitis, which had developed prior to the war but was aggravated by his active service. Sadly, he then died on 2 October 1918, leaving Gertrude a widow.

Having served on the Western Front in the Essex Regiment in 1916-17, John Thuey transferred to the Royal Flying Corps as a driver in February 1918 and thus joined the Royal Air Force when it was founded in April that year. He served with his unit in South Russia from April 1919 until March 1920, after which he left the RAF. He and Cecil both survived their military service: John died in 1943; Cecil married Neva Oxley in 1918 and lived until 1975.

Eliza Thuey died aged 61, towards the end of 1919, a year after her eldest son had passed away and while her youngest son was still absent on military duties. I hope that Cecil and his sisters and sister-in-law were able to be there for her at the end, as they had been when she was ill four years earlier.

We tend to think of families in the Great War in terms of the service of the sons, brothers or fathers in the armed forces. They were not necessarily the only ones to play a part, though – many women went to work in munitions or other jobs as more men left civilian life. One example of this is the Holton family who lived in Bermondsey.

In 1911, leather finisher James W Holton and his wife Sarah Ann (nee Longhurst) lived at 33 Marcia Road, off the Old Kent Road, with seven of their children, who ranged in age from 11 to 24. They had married on Christmas day 1883 and had a total of 16 children before James died in 1913 (Sadly, seven of their children had died before 1911, another two lived elsewhere). 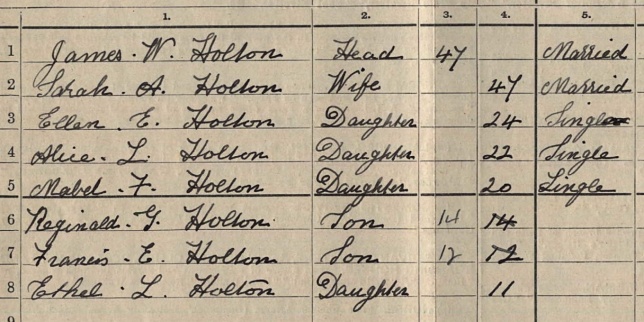 Reginald George Holton, a 14-year-old errand boy in 1911, was working as a warehouseman in 1915 when he went to East Dulwich to enlist in the Royal Field Artillery. He was a 5 feet 4 inches tall, with a tattoo on his right arm. Before going to the front, he got in trouble for going absent without leave for a week in November 1915.

Despite his indiscretion, he joined 167 Brigade’s artillery in France as a drvier on 12 December 1915 and remained on the Western Front for the next three and a half years. In May 1916, Driver Holton joined the D battery of 162 Brigade’s artillery.

Meanwhile Sarah Holton and her youngest daughter Ethel went to work for John Bell, Hill and Lucas, Ltd, making gas masks in their factory on Tower Bridge Road, Bermondsey. The company were pharmaceutical chemists in peace, so well placed to make gas masks to keep up with the advances in chemicals used in gas warfare in the Great War. They had opened their London Works on Tower Bridge Road in 1909.

According to the National Roll of The Great War, Sarah worked in the factory for three years (presumably from 1915 until the end of the war) and was joined there by 17-year-old Ethel from August 1917 until September 1918.

In the Holton family – like many others – at least three members took part in the war effort. Reginald drove for the artillery in France and Flanders, while his mother and sisters were making gas masks to counter the gas shells fired by his counterparts in the German artillery.

Posted by Stuart on 16 February 2013 in Ordinary Londoners, Women