RSS
← Victoria Station, 10 November 1920: the arrival of the unknown warrior
Get a haircut! →

Hitler’s wreath at the Cenotaph

The central public site for national commemoration of the Great War is the Cenotaph in Whitehall. It represents the war dead of Britain and the Empire (irrespective of race, colour and creed). As such it meant a lot to those who served and those whose friends, comrades and relatives were killed in the war. In 1933, it was the site of protest against Herr Hitler, the new Chancellor of Germany.

Adolf Hitler became chancellor of Germany in January 1933 (he only became “Führer of Germany” after also becoming President in 1934). On 10 May 1933, his emissary Dr Alfred Rosenberg laid a wreath from the Chancellor at the Cenotaph on behalf of Hitler. It was not welcomed.

On the 11th, it was snatched and thrown in the river. Newspaper accounts differ, but it appears that early that morning a man stepped from a car and slashed off the swastika that was displayed in the centre of the wreath. Later that morning, another man (or possibly the same one) got out of a car and snatched the wreath – taking it off with him in the car and throwing it into the Thames. 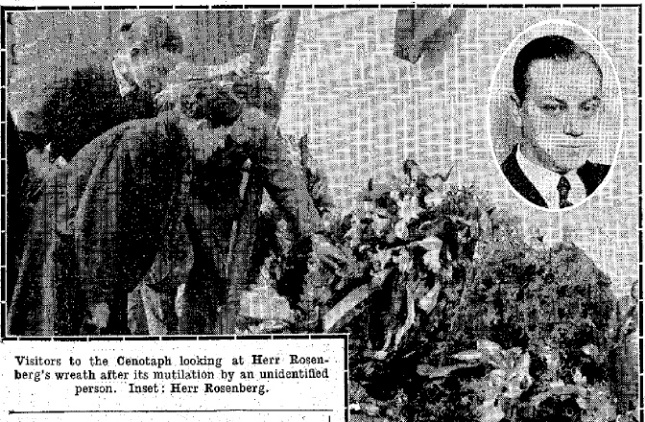 People inspecting the damaged wreath (D Mirror 13/5/33), presumably before it was thrown into the Thames

The man who did this (or at least certainly took the wreath away) was James Edmonds Sears, a 57-year-old British Legion member and owner of a Norfolk building firm, who was also the prospective Labour candidate for the St Pancras South West constituency in the next election. Sears had served in the Great War as an officer in the Royal Army Service Corps, arriving in France in November 1915. 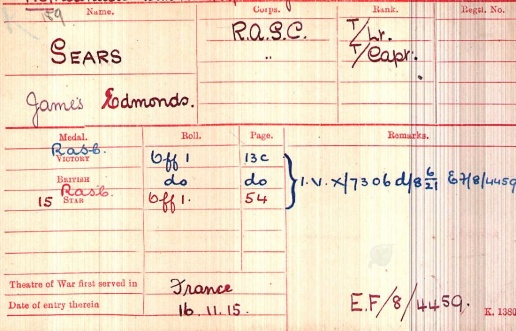 Appearing in Bow Street magistrate’s court on 11 May, Sears stated that:

I removed the wreath from the Cenotaph as a deliberate national protest against the desecration of our national war memorial by the placing on it of a wreath by Hitler’s emissary, especially in view of the fact that Hitler’s Government at the present moment are contriving to do those things and foster the feeling that occurred in Germany before the war in which so many of our fellows suffered and lost their lives.

Sears was cleared of a charge of theft but ordered to pay 40 shillings for willful damage, being told that whatever his personal views it was an ill-mannered thing to do. The general public feeling, though, seems to have been supportive of Sears. In Germany, the regime was furious. One German newspaper stated that England’s reputation for treating its guests well had been dealt a severe blow.

An American ex-serviceman also added his voice to the protests, laying a single lily beside the cenotaph with a card reading:

If the Unknown Soldier could speak to this unknown American, he might voice his preference for this single flower to the wreath of a murderous dictator which now desecrates this memorial.

A policeman removed the card, but left the flower.

The eventual fate of Hitler’s wreath, is neatly summed up by the Yorkshire Post:

It appears that when a wreath has been placed on the Cenotaph, it becomes, ipso facto, the property of the Office of Works. When this one had been rescued from the river, Scotland Yard inquired what the First Commissioner of Works wished to have done with it. A representative inspected the wreath and reported that it had suffered so severely from immersion as to be of no further value. So Hitler’s tribute has now been consigned to the rubbish heap with the approval and blessing of Whitehall.

This was not the only time that the Cenotaph has been at the centre of protest. The event also has resonance with unease people feel today about the British National Party laying wreaths at war memorials – including one group removing a wreath in Lancashire in 2010.

It was also not the last time that a swastika-bearing wreath was laid at the Cenotaph in 1936, as Nazi ex-servicemen laid a similar wreath there as guests of the British Legion.

German ex-servicemen in Whitehall, 1936 (from nickelinthemachine.com)

German ex-servicemen giving a nazi salute after laying their wreath at the Cenotaph (Yorkshire Post, 21/1/36)

Postcript: James Edmonds Sears did stand as Labour candidate in St Pancras SW in the 1935 General Election, but he was defeated by the Conservative incumbent Mr G G Matheson.

Interesting blog post from Nickelinthemachine.com about the Hitler wreath, the other anti-Nazi protests and the Cenotaph.

← Victoria Station, 10 November 1920: the arrival of the unknown warrior
Get a haircut! →

3 responses to “Hitler’s wreath at the Cenotaph”