RSS
← Santa in wartime
When will this war end? →

This week sees the end of London Transport’s “Year of the Bus”, as well as the first year of the centenary of the Great War. In this last post of 2014, we will have a brief look at some of the changes to the life of London’s buses that the years 1914-1918 brought – at war and at home.

In one of the earliest posts on this blog, we heard of a Londoner who travelled to the Front in 1914 on the same bus that he had used at home – with the same driver! This was just one of many London buses that were deployed with the British Expeditionary Force in 1914 and remained there for the duration. 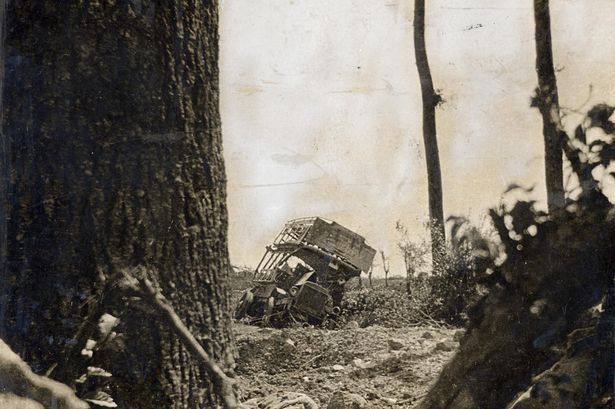 The first buses to come into service did so slightly earlier, though – back in London. As soon as the war began, London’s buses were pressed into action. The same issue of the Daily Mirror that carried pictures of the scenes in Westminster on the night that Britain declared war on Germany also showed the Territorial Force using a requisitioned bus to transport men and ammunition – the men sat on the upper deck, while ammunition “from the powder magazine in Hyde Park” (an oddly detailed description for wartime!) was carried inside.

Once the buses did reach the front they were used for various purposes. As well as transporting men to the front, they were also used for transport in the opposite direction – both for regular movement of troops and to move the wounded back to hospital for treatment.

It was not only people who needed to be moved around at the front. Pigeons were housed in converted buses:

Even more dramatic was the change to this bus, stripped entirely of its superstructure and made into the mobile base of an anti-aircraft gun.

The volume of traffic on London’s public transport system in the early twentieth century was enormous. In 1881 41.1 million bus journeys were taken in the capital, along with 40.5 million train journeys; by 1901 the figures were 269.9m bus journeys and 236.5m train journeys plus 340.7 journeys by tram – nearly 850m journeys in total. In 1908 the total number of journeys was 1.36 billion and in 1913 over 2 billion.

Around nine hundred or a thousand London buses went to war during 1914-1918. According to the Metropolitan police’s chief superintendent of carriages, there were 2,277 “motor omnibuses” on the capital’s road at the end of 1918, compared with 3,057 in 1914. This must have made a difference to the availability of public transport in the streets during the war years – with the reductions in civilian train services as well, it was noticeably harder to get around during the war than in the years that preceded it. Bus manufacturing also virtually stopped – turned, like so much other production, to war purposes for the duration. The numbers of passengers, however, continued to grow: 2.37 billion journeys on public transport in London in 1918, 682 million of them by bus

As well as the disappearance of the buses, many of the omnibus workers also went to war. By February 1915, 21% of the men employed in London’s bus and tram services had joined the armed forces and only 3.5 percentage points of the shortfall had been made up.

By late 1915 it was quite obvious that women would be needed to keep London’s transport infrastructure working. The first female bus conductor was taken on by Tilling’s (one of the smaller of the main bus operators) on their No 37 route in late 1915. The London General Omnibus Company (LGOC), the main bus provider in the capital, lagged a bit behind but eventually took on bus female bus conductors in February 1916.

One of the first female London bus conductors (the caption notes that London was behind other towns in employing women this way) (Daily Mirror, 28/10/1915)

A few months later, the LGOC started to employ women – in rather unfriendly weather conditions (especially for an open-topped double-decker!) (Daily Mirror, 25/2/1916)

As with most expansions of women’s work during the war, this change was greeted with much publicity around women doing their bit and how they could do ‘man’s work’. By mid-1918, the number of women employed on buses across the country had increased from 300 to 4,500 (on trams it was even greater: from 1,300 to nearly 22,000). It was estimated that 90% of conductors on trams and buses were women. Generally, men were retained as drivers and doing some of the heavier (and dirtier) engineering roles. The conducting role was said to be beneficial to the health of those women who did it.

In reality, women were not always seen as directly comparable to men doing the same work, so – although their pay was generally the same as men’s – women working on London’s buses were denied a 5s per week ‘war bonus’ awarded to their male colleagues in the summer of 1918. That August, women transport workers in London began a strike that went nationwide to secure an equal war bonus, which was then extended to women munitions workers later in the year. . 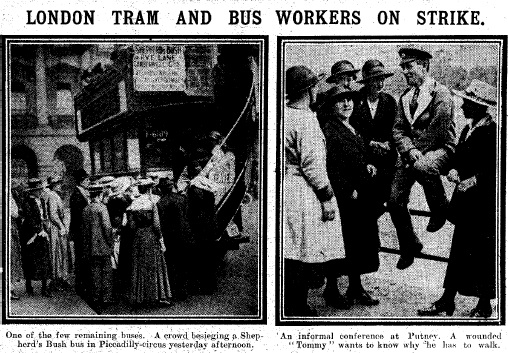 Just as buses at the front could be caught up in the devastation of war, so too could some unlucky vehicles – and their crews – in London. When bombs fell around Liverpool Street station, one bus was very heavily damaged and its driver and conductor killed.

Michael Macdonagh described the scene in his war diary:

Making my way across Moorgate Street and down London Wall, I came to the place where a bomb dropped in front of a motor-onmibus bound for Liverpool Street Station, and blew it to pieces. Twenty people were on board, including the driver and conductor. Nine were instantly killed and eleven seriously injured. The driver had both his legs blown off and died on his way to hospital. The door of a block of offices was pointed out to me where the housekeeper standing on the steps was killed. The roadway was strewn with the glass of shattered windows.

In the driver and conductor’s well-attended funeral procession the next week, a bus was decked out with garlands in his honour.

Seven hundred omnibusmen attended the funeral of their colleauges killed in the 8/9 September 1915 Zeppelin raid. A decorated bus took part in the procession. (Daily Mirror 21/10/1915)

As with so many aspects of London life, the Great War brought big changes to the buses. Transport was one of the major – and most visible – areas of the expansion of female employment, while some of the vehicles went to war in 1914 alongside their male operators.

← Santa in wartime
When will this war end? →