The first day of the Battle of the Somme is one of the most remembered and commemorated days in Britain’s military history. On that day the British Army suffered its worst casualties of any single day in its history.

I try not to focus too much on the war dead – it is also important to remember those who served and survived (and to remember the impact of the war at home in London) – but the centenary of the first day of that battle stands out as a day to reflect on the cost of the war in the starkest terms. It is impossible to say how many Londoners were killed or wounded on 1 July 1916, but we can look at the record of London infantry units involved in the battle. 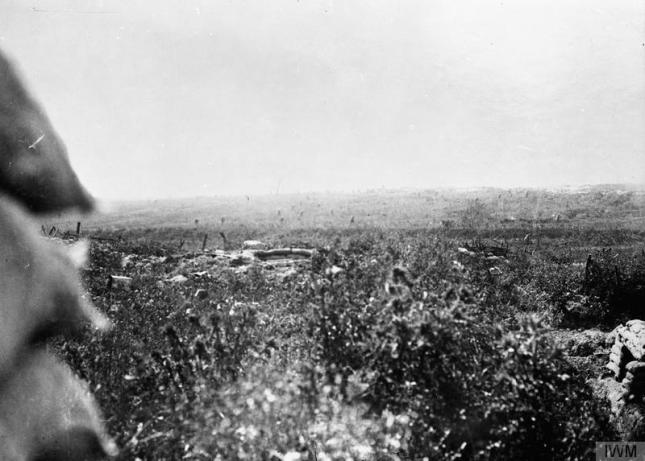 Soldiers of the 16th Battalion (Public Schools), Middlesex Regiment are taken back down the slope after having reached the crater on Hawthorn Ridge, which is on the centre of the horizon. The photograph was taken at 7.45 am, 1st July 1916. © IWM (Q 755)

If we look at the number of fatalities recorded for 1 July and the subsequent four days (many of whom would have died of wounds from 1 July), we can see how badly some of the London and Middlesex battalions were affected by the fighting. These figures come from the Commonwealth War Graves Commission’s database of the war dead:

So, from these 11 battalions, over 2,000 men died over those days. Almost three quarters of them have no known grave and are recorded on the Thiepval memorial to the missing. (The ‘total’ figures are for these battalions, not the whole London or Middlesex Regiments, each of which suffered a handful of other casualties during those days).

Each figure in the table was, of course, a man – most likely a young men and in this case probably a Londoner. Among them were:

Clifford Hugh Butcher, an 18-year-old from Leyton, whom we met in a previous post about the appeals for information published in the newspapers during the latter half of 1916. His picture appeared in the Daily Sketch in August 1916.

Private Henry Leicester Oldham from Lavender Hill, SW. He was the son of a retired butler and was serving in 9th Platoon, “C” Company, Queen’s Westminster Rifles when he was reported missing on 1 July.

One man who was wounded but not killed that day was Captain George Johnson, an old soldier commissioned from the ranks during the war. The National Army Museum has his tunic, which I discovered and researched for their 2006 exhibition on the Battle of the Somme when I was a curator there.

Tunic of Captain Johnson, 2nd Middlesex. He was wounded in the hip and arm on 1 July 1916, his tunic clearly shows where it was cut away from his wounds. Image © National Army Museum

The caption I wrote for it is used on the NAM website:

“Johnson was wounded on 1 July 1916 during the attack on Ovillers-La Boisselle on the Somme. Machine-gun fire devastated his battalion and although a few men reached the second line of German trenches, by the end of the day all had returned to the British lines or lay in no-man’s land. All but 50 of the battalion were killed, wounded or reported missing. Johnson was wounded in the chest, pelvis and right forearm. You can see where his uniform was cut away from his arm. He survived the war and lived until his 90s.”

These men were just some of the thousands of Londoners who were killed or wounded on 1 July 1916. The British Army suffered nearly 60,000 casualties that day, including 19,000 dead. The sheer number of casualties – and the reality of the fighting that caused them – is almost unimaginable for most of us today. One hundred years on, it is worth taking a moment to reflect on the sacrifice made by the nation, its Empire and its allies that day in Picardy.

Posted by Stuart on 1 July 2016 in Ordinary Londoners, War Dead

When we read about the bravery of nurses in air raids, it can be easy to underestimate the danger they were in. These raids on hospitals could be enormously destructive, and of course the patients were often immobile in the face of that danger. The coolness and bravery of the nurses must have been a real benefit. One of those who could not be saved, though, was Stewart Arkcoll Gabriel.

(From de Ruvigny’s Roll of Honour)

Stewart Arkcoll Gabriel was born in June 1878, the son of merchant James Sutcliffe Gabriel (who owned and ran a wharf) and his wife Susan (nee Arkcoll), the middle son and one of six children. The Gabriels lived in a large house on Leigham Court Road in Streatham. By 1901, Stewart Gabriel, still living at home, was working for his father. In 1905, Stewart was granted the freedom of the City of London as the son of an existing freeman in the Company of Goldsmiths.

In 1906, Stewart Gabriel married Elsie Dorothy Thornton in Forest Gate. By 1914, though, Stewart they were living in Epsom, Surrey, with their daughter Judith Ashley Gabriel (born in July 1913). In March 1915, Stewart enlisted in the army, giving his profession as Dog Breeder.

Gabriel was not at home in the army, though. After reporting for duty in Woolwich on 16 March, he lasted only another week before being discharged as not likely to become an efficient soldier. He had been very specific about the terms of his enlistment – he was to serve at home only and insisted that he should be put to work in shipping, to suit his experience as a civilian. Instead, he was sent to No. 2 Remounts Depot in the Army Service Corps, even though – as he wrote on 23 March “I knew next to nothing about horses.”

His entry on de Ruvigny’s Roll of Honour states that his defective eyesight meant that he could serve. In fact, the army doctors thought his eyesight (although poor) was good enough for service. He was rejected anyway in March 1915 and returned to civilian life.

He was eventually conscripted in November 1916 and sent into the Royal Garrison Artillery – not exactly the kind of job he had been after in 1915 and certainly not one that would keep him at home in England.

After going out to the front in April 1917, he was wounded but soon returned to his unit – 76th Siege Battery RGA. The Battery served around Ypres during the Third Battle there, now better known as Passchendaele.

A few weeks into the battle, Gabriel was gassed and sent off to a Casualty Clearing Station at Dozinghem, near Poperinge in Belgium. On the night of 21/22 August, the CCS was attacked in an air raid. As the Matron-in-chief recorded in her diary (on the excellent Scarlet Finders website):

47 Casualty Clearing Station bombed: Miss Roy, QAIMNS, Sister-in-Charge to say that her Station had been bombed last night, several bombs falling near the lines for walking cases and several of them were injured; one of the Sisters, Miss W. M. Hawkins, TFNS, was injured in the left thigh and would be evacuated to the Base by the next Ambulance train with 4 other Sisters suffering from shock. Altogether there were about 50 casualties, 12 of whom have died, including one RAMC orderly.

One of those 12 fatalities was Stewart Arkcol Gabriel. He was buried at the local military cemetery, one of over three thousand British and Empire casualties buried there. The Epsom and Ewell History Explorer website has a photo of his headstone at Dozinghem. Elsie Dorothy Gabriel lived another 30 years, until October 1948; their daughter Judith married in 1940 and lived until 1986.

Posted by Stuart on 12 March 2013 in Ordinary Londoners, War Dead