The National Register: the beginning of the end of voluntary recruitment

August 1915 brought Britain a “Registration Day”, an extraordinary census on 15 August recording information about every man and woman between 15 and 65 for a new National Register. Its purpose was to find out how many men of military age were still civilians, how many could be spared for war work and, more pressingly, how many could join the armed forces.

During the first year of the war two million men had joined Britain’s army and navy (the air force was not formed until 1918). Hundreds of thousands were also serving as regulars, reservists or territorial force men, having joined up before August 1914. By February 1915, 15% of London’s male industrial workforce, and probably more of its service sector employees, were serving. (This was roughly in line with the national picture for industrial employees, but London’s large service sector bumped up London’s level of war service).

By early 1915, the numbers joining up each month had levelled out at around 110,000 and the authorities were worried that not enough men were coming forward to build up an army (and replace its casualties) to win the war. The Government wanted to know how many eligible men were still available. The National Registration Act 1915 was passed by Parliament on 15 July 1915, paving the way for the creation of the register a month later on August 15th. While the register did not in itself make men liable to serve, the responsible minister (Walter Long) said that ‘it will compel them to declare that they are doing nothing to help their country in her hour of crisis.’

Preamble and first clause of the National Registration Act 1915 (from legislation.gov.uk)

The Derby Scheme website summarises the process of building the register well:

“The registration was to undertaken in a similar way to a census however, unlike a census, the head of household was not responsible for completing the form and instead each person who came under the act would complete their own form. Some 29 million forms were issued across England, Scotland and Wales.

“Men were required to complete a granite blue form and women a white form.

“The returned forms were collected shortly after 15 August 1915 and compiled by the local authority. A summary of the register was passed to the Registrar General who compiled statistics however the actual forms were retained at a local level.”

Registering in a common boarding house from Trevor Wilson, Myriad Faces of War

It was a major undertaking and required a huge amount of work to complete. In England it was organised by local authorities (in Scotland it was centralised), and conducted with the help of a large number of volunteers. In St Marylebone, the council’s general purposes committee noted on 7 October that,

“The Town Clerk has reported to us on the steps taken for compiling and maintaining the Borough’s portion of the National Register. The work has engaged a very considerable number of voluntary helpers and a large number of the staff since the beginning of August. The invitations of the President of the Local Government Board and the Registrar General for capable voluntary helpers from among the professional and official classes did not meet with a very large response, although several barristers, members of the Council, and leading residents kindly offered their services; but at the last moment a number of church workers, workers from the Women’s Emergency Corps, the Women’s Service League, and others, came forward, and a sufficient number of enumerators undertook the difficult task of the distribution and collection of the Registration forms.

“Owing to the large number of foreign residents in the Borough it was also necessary to secure interpreters, and several residents volunteered for this work.”

The register of men in St Marylebone had been completed by 7 September but the register of women was still being worked on. Nearly 100,000 forms had to be dealt with and over 70,000 certificates completed and sent out. 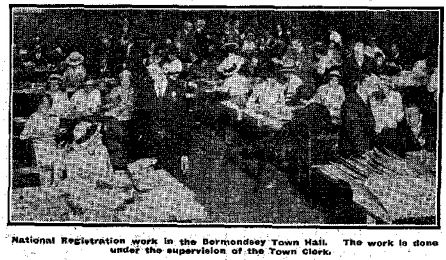 The information on the forms was sent to the Local Government Board, who transferred the details of men of military age (i.e. 18-41 years old) onto pink forms that listed their employment and family details. If they employed in war work (for example, coal mining, munitions work, railways and some agricultural work) their pink forms were marked with a black star – leading to the term ‘starred’ meaning that someone had an essential war role.

People who were registered were sent a registration card:

As you will see, this one – for Thomas Gorman of 28 Farmilo Road, Leyton, records his name, address and occupation. It also carried the mark of the next step in the process – the Derby Scheme: Thomas Gorman ‘attested his willingness to serve’ in December 1915.

Nationally, the 1915 register showed that over 5 million men were not in the forces, of whom 2.18 million were single and 2.83 million were married. Of those single men (the first to be conscripted in 1916), 690,138 were in ‘starred’ roles meaning that nearly 1.5 million were potentially available for military service.

The National Register was a major waypoint in the move from the voluntary recruitment of 1914 to the conscription system introduced in 1916. It gave the Government a statistical breakdown of how many single and married men, of what ages, remained in the civilian population – and it gave them those men’s names and addresses. After those men were asked to enlist or attest in the Derby Scheme at the end of 1915, the Military Service Acts of 1916 introduced compulsory military service for all men of military age (unless they could get an exemption).

Posted by Stuart on 25 August 2015 in Recruitment

3 responses to “The National Register: the beginning of the end of voluntary recruitment”